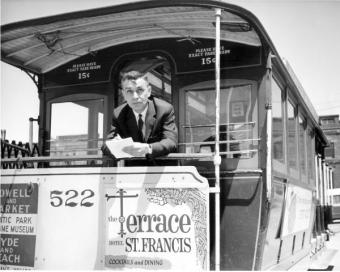 Miroslav Šašek was born on the 16th November 1916 in the Prague district of Žižkov. He was an architecture graduate and studied drawing and painting with Czech landscape artist Otakar Blažíček, and after completing his studies he provided drawings for newspapers and illustrated a large number of books, as well as designing puppets in collaboration with his first wife, Jindřiška.

In 1947 he moved to Paris to study at the École des Beaux Arts, and when the Communists came to power in what was then Czechoslovakia he made the decision not to return to his homeland. He earned a living as a graphic artist (in advertising) and architect, and from 1951 he was employed in the Czech section of Radio Free Europe in Munich.

The books from the This is... series have earned their author a large number of awards over the years, including an entry in the IBBY (International Board on Books for Young People) Honour List for 1979. Besides his work in books, Miroslav Šašek was also a painter throughout his life.

Miroslav Šašek died in Switzerland on 28th May 1980. Since the year 2000 his books have seen reeditions in America, France and Germany, and this year they are to be published for the first time in Czech.

Some time ago, Miroslav Šašek copyright heirs from the Czech Republic, Belgium and Switzerland made the decision to use those rights for the establishment of a charitable trust, which was registered at the Regional Court in České Budějovice on 26th September 2011. The aims of the Miroslav Šašek Foundation – as outlined in its statute – included those of encouraging the dissemination of the work of Miroslav Šašek internationally and of promoting the creation of children’s books by contemporary authors.

Mike and the Modelmakers

Stone is not cold